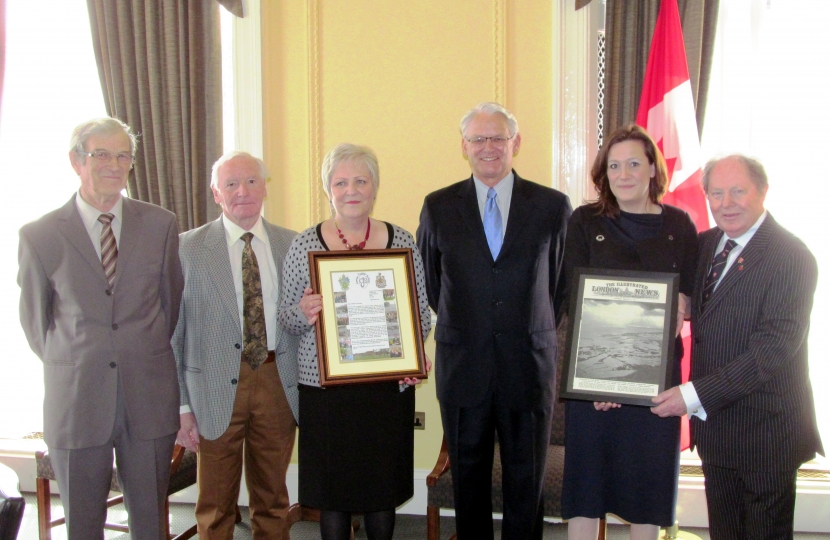 Castle Point MP Rebecca Harris and a delegation of 1953 Flood Survivors met with Her Majesty’s High Commissioner of Canada, Mr Gordon Campbell on Monday to formally thank the people of Canada for their generosity to the people of Canvey Island in the aftermath of the flood sixty years ago.

The delegation, led by Cllr Ray Howard who lived in North Avenue at the time, presented the High Commissioner with an original front page of the February 1953 edition of ‘The Illustrated London News’ which featured the flood and was published around the world, as well as a framed commemorative letter of thanks written by the School Council of Canvey Junior School, which was one of the main distribution centres for Canadian aid in the days after the flood.

Canvey received relief aid and gift parcels from all over the world in the wake of the floods, but the majority came from Canada who were incredibly generous giving both financial and material aid to the victims of the flood. From Canada’s generosity shops were sent up to hand out essentials  including food, water, clothes, baby clothes, blankets and toys. The Canadian government also delivered a carpet, a patchwork quilt, a bag of gypsum to spread on the ground to reverse the effect of the seawater and a sack of coal to every household. They also provided a portion of Pepsi to serve at schools instead of milk!

To show appreciation and gratitude to the people of Canada, the residents of Canvey Island created a permanent lasting tribute of 100 trees of Canadian origin including Douglas Fir, Western Red Cedars, Western Hemlocks, Canadian Maples and Contorta Pine which were planted over 30 acres at a memorial site of the Newland area but later moved to the Paddocks, the area on Canvey Island is significantly known as "Canada Corner".

Remembering the generosity of the Canadians in the days after the flood Cllr Howard said:

“After the floods many people had lost everything and everyone on the island knew at least one person who had lost their life. Despite everyone being determined to move on and rebuild their lives and livelihoods, it was a very bleak few days for all of us after the flood waters had subsided. But every one of us received these marvellous gift parcels from Canada and it was a real lift to our spirits. Food was still on ration and so to receive  gift parcels full of goodies like chocolate bars and bananas, was just like Christmas. Everyone couldn’t believe that people from half way around the world were so touched by the plight of us islanders that they sent us all these gifts over thousands of miles. We will never forget the generosity of the Canadian people and they will always have friends here on Canvey Island.”

“The tragic events on Canvey Island during those awful nights sixty years ago touched many hearts in Canada. The relief that flowed across the Atlantic is a fantastic example of the compassion and affection that the peoples of our two great countries have always shared and continue to share to this very day. I was very proud to meet a delegation of flood survivors to hear firsthand how that relief made a difference to their lives and to accept thanks on behalf of the people of Canada.”

The meeting was arranged by Rebecca Harris MP and the High Commission following Cllr Howard’s praise of the Canadian relief effort during his speech at the memorial service to commemorate the sixtieth anniversary of the floods attended by HRH Princess Royal in Chelmsford Cathedral earlier this year.