Castle Point MP stands up for her local publicans 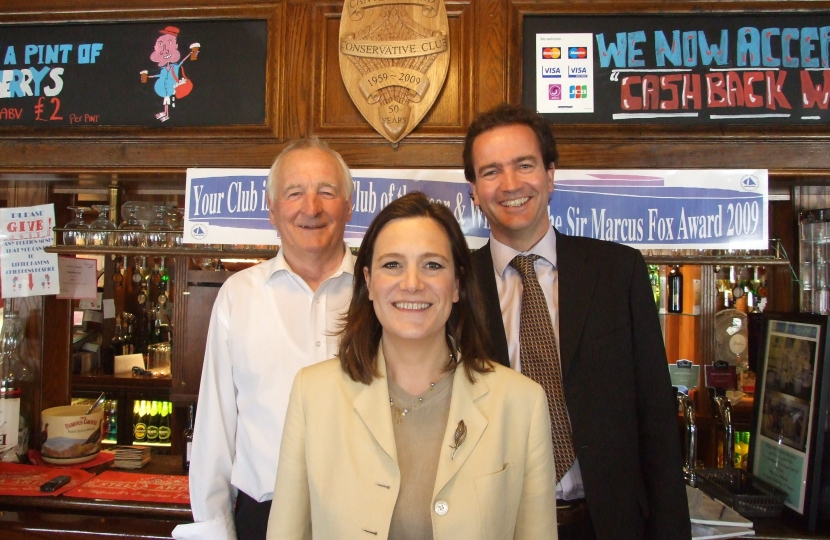 Rebecca Harris took part in a debate in the House of Commons on Thursday to raise the plight of local pub landlords in Castle Point at the hands of large ‘Pubcos’.

The Backbench Business Debate was on pubs and planning legislation, coming at a time when 2 pubs a week are being closed and converted into supermarkets. The debate focussed on how permitted development rights are allowing pub companies to sell off their pubs to supermarkets to make huge profits. This loophole means that the buyers do not need to apply for planning permission and can get away with converting the site quickly, making it more profitable for the pub companies than maintaining a pub

Rebecca raised the case of two closures that have happened in Castle Point recently as examples.

The first of the King Canute Pub on Canvey, which served its last customer in May 2014. The pub, one of Canvey’s most historic building, was originally called the Red Cow, but during the devastating flood of 1953 it was at its doors that the water stopped. Hence it’s renaming as the King Canute. Despite its popularity with local residents, the Pubco owners closed its doors to make profit by selling off the site for development.

Likewise, the same fate occurred to another well liked pub on Canvey the Silver Jubilee, which opened to commemorate the Queen’s landmark in 1977. The site of the old pub is now a Morrisons local with new flats above and again was converted without needing planning permission.

It was pointed out to Rebecca previously by Canvey Councillor Ray Howard that if a single application had been submitted to turn the pub into a supermarket with flats above and to build houses on the car park, the change would have been large enough to trigger section 106 funding—development money for the community. This funding could have been used to put in a slip road for what many residents find a very difficult junction and which would help them get out into heavy traffic, which Rebecca, Ray and Winter Gardens ward Councillor Steven Cole have been calling for.

Rebecca raised these cases as examples of the underlying theme that large pub companies are behaving more like property developers to make a quick profit by exploiting this planning loophole. Rebecca called on the Government to look at this matter and tighten up the planning legislation surrounding pubs so that in future they will be recognised as community assets as a default position and afforded the protection that community assets get under the law.

Commenting, Rebecca said “Pubs are community assets. They serve the public in a variety of ways, as I have witnessed attending many events at pubs across Castle Point. They have plenty of community uses and some have strong historic value locally. They are currently left with incredibly little protection. I believe they should be recognised as community assets as a default position—not one that requires a long, elaborate process, which residents are often not aware of and do not realise that they could have followed until it is too late.

It really is time that the Government looked at this, because their other excellent efforts to help the pub trade, by removing beer duty and so on, will mean nothing if pubs are simply turned into supermarkets!”