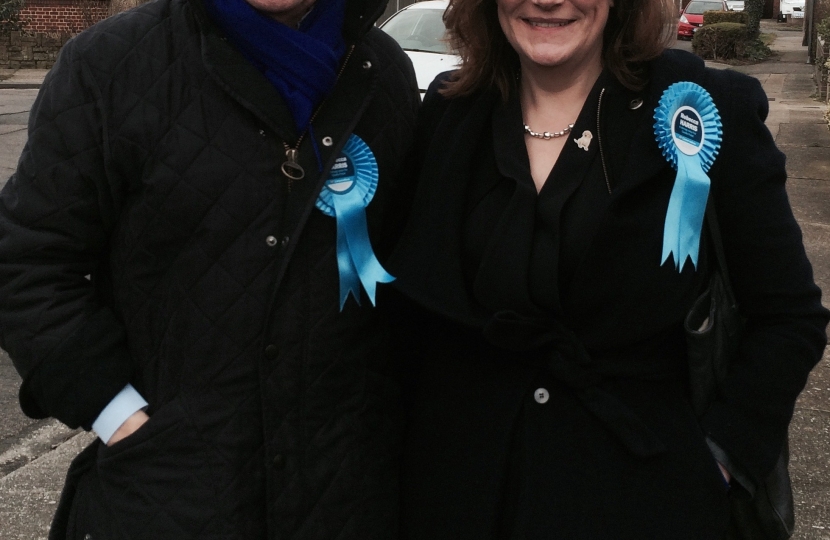 Local MEP Geoffrey Van Orden and Castle Point MP Rebecca Harris have been out campaigning in Benfleet with a group of young supporters.

Mr Van Orden commented: “On the doorstep there was a very positive reaction. Most people I spoke to recognised that the economy has now turned a corner. There is a new air of confidence in the future with employment up, pensions up and mortgage costs kept low.

“People are beginning to feel a little better off again.  But there are still concerns, not least on immigration.”

“I have campaigned for years on the subject of immigration and the government has already made inroads into non-EU immigration, still the largest, but there’s much more to do. Conservatives are determined to deal with this problem. No one else has both the will and the power to do this.

“On the EU front, recent polling that has been carried out across Europe shows that we are not alone in our concerns and that there is a lot of support for the approach taken by David Cameron. This augurs well for the negotiations on reform of free movement and other contentious areas, which will begin in earnest after the General Election.

“People need to understand that only a Conservative government will have the commitment to get a grip on immigration and to give the British people a vote on EU membership.

“Care needs to be taken that, because of some particular irritation, voters do not lose sight of the big issues and sleep walk into chaos, after all the hard grind to get us to a better place. You have to ask yourselves, given the big security concerns faced by our country and the economic challenges that lie ahead, who you would rather have as Prime Minister – David Cameron or Ed Miliband? In reality, that is the choice that people will face. ”

Rebecca Harris said: "It was great to have Geoffrey with us out knocking on doors at the weekend. Europe is a big issue for many people of the Castle Point and he was able to give people the inside view on the fact that Conservative MEPs are the ones fighting our corner in Brussels and  why precisely we need the IN/OUT referendum only the Conservatives can deliver."