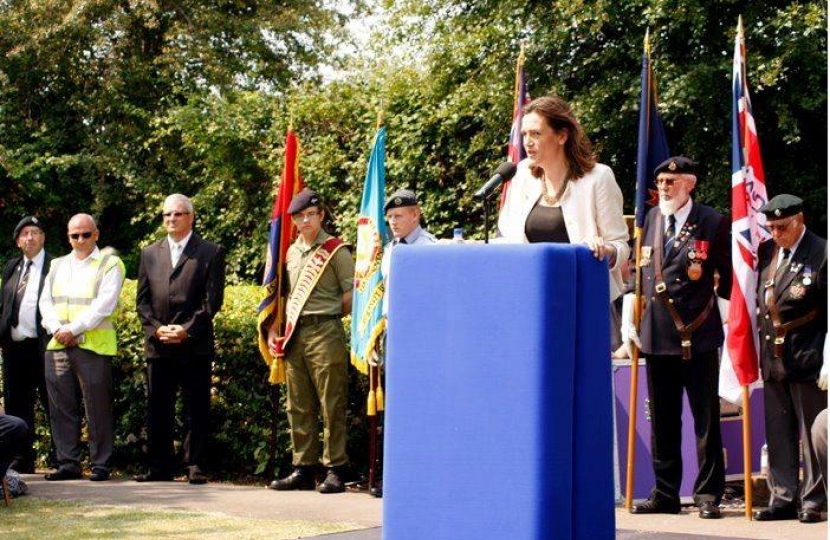 Rebecca was elected as Member of Parliament for Castle Point at the General Election in May 2010.

Rebecca spent the majority of her working life in business, principally with Phillimore & Co, specialist publishers of British local history (including publishing titles on Hadleigh, Thundersley, Canvey Island and Daws Heath).  At Phillimore Rebecca worked in various aspects of the firm including warehousing,  as a delivery driver and Sales Rep. She joined the Board as Marketing Director in 1997, a position she held until the sale of the firm in 2007.

Having been an employer, Rebecca believes that now, more than ever, we need people with her sort of practical business experience in the House of Commons.

Rebecca also has experience of local government having been a councillor for four years.  She is strongly committed to "localism" believing that turnouts at local elections will be higher, and decisions will be better, if local councils exert more power over the decisions that affect their residents.

Prior to the 2001General Election Rebecca took a sabbatical to work in the Conservative Research Department where among other things she helped fight the Labour party's mishandling of the Foot & Mouth epidemic and campaigned against damaging greenbelt development.

More recently Rebecca was the Political Special Adviser to the Shadow Secretary of State for DTI, Health, Education, Transport and Environment respectively, in the last Parliament.  Before being elected to represent Castle Point in 2010, Rebecca worked at the House of Commons on a part-time basis as a caseworker dealing with constituent's problems, in order to “get a solid grounding in the role of MP, a job for which there isn't any formal training."

Rebecca has been campaigning hard on local issues, fighting for the protection of Castle Point's green belt from Labour's centrally-imposed building targets, working with residents groups against inappropriate industrial development on Canvey Island, especially Methane storage, and seeking improved infrastructure across the Borough.

Rebecca is a member of the Business, Innovation & Skills Select Committee which meets weekly, and the Regulatory Reform Committee.

Rebecca is a keen supporter of small businesses, from her background of being an employer, and has been campaigning to make sure the Government is doing all it can to ensure support for small enterprise. One issue in particular that Rebecca has been campaigning on is Business Rates. In her role as a member of the Business, Innovation and Skills Select Committee business rates is an issue that has been coming up in a number of their enquiries. Rebecca had correspondence with the Chancellor prior to Autumn Statements and Budget days on this issue and was pleased to see the Chancellor cap small business rates to 2% in the Autumn Statement in December 2013.

Rebecca has been campaigning on the issue of trying to get drivers who are knowingly medically unfit off the road following the tragic case of one of her constituents. Rebecca has had meetings and correspondence with the Department for Transport, the DVLA, leading insurance companies as well as various road safety charities to see how this issue could be tackled. Rebecca was also named Road Safety Parliamentarian of the Month by the road safety charity ‘Brake’.